Micromanagement: aka "Driving Your People Crazy"

I have written before about how to delegate.  Here are some do's and don'ts for delegation as a review:

delegate tasks that can be done better by someone else.

delegate tasks that will develop another person.

delegate tasks that are repetitive in nature.

delegate things that you just don't want to do.

delegate things that you are not willing to be responsible for if mistakes are made.

Leaders can be more effective when they get things done through others. For more information about delegation, see: Article

The most frequent way that delegation goes wrong is not by the person that the management activity or responsibility is delegated to.  It is, in fact, by the leader who delegates and then does not appropriately allow the subordinate latitude to handle the situation and in doing so subverts the process of delegation.  Sometimes the leader actually performs the work that has been delegated with a "nobody can do this better than I can" connotation.  This backfires in a couple of ways.  First, work that is delegated is intended to be shifted from one person's responsibility to another.  When the first person does the work, it was useless to ask another person to get involved and whatever potential time was freed up is now lost.  Second, for the person that has been delegated to, to have the work overly scrutinized or taken back and done by the leader is demoralizing.  Having things delegated to you is a compliment in your ability to handle more and more individual responsibility.  To then have that pulled back and done for you is embarrassing.

Wikipedia's entry on micromanagement has a great discussion on the pathology involved in those who micromanage others.  I recommend reading it in full.  The bottom line is that people who are micromanagers are workplace bullys or have severe narcissistic tendencies.  They also are unlikely to be able to self-identify their behaviors. 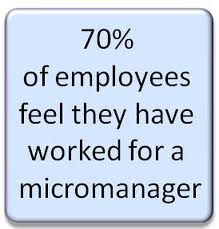 The Road to Recovery

Mary has just received her results from a 360 degree survey.  The interpretation is that compared to other leaders she is below expected level as judged by her management team.  After meeting with her team, it is clear that she is seen as a micromanager.  She is working an 80 hour week trying to be present for all decision-making meetings and her entire management team is afraid to make a decision without her input.  She has been having individual meetings with each of her direct reports every week plus requiring a weekly written report.  Her management team has told her this is overkill and they don't feel that they have time to manage for having to keep her informed.  Mary has felt overworked but has not been able to self-identify any micromanagement issues.

After reading the Wikipedia materials, does it appear that Mary may have issues?

What steps could Mary take?

Mary decides to have a professionally facilitated retreat with her management team.  The results of the 360 degree survey will be presented as well as overall performance of the division.   Mary takes the following steps:

Please comment on this blog.  Do you think Mary is a micromanager, do you think she is on the road to recovery?  What other steps should she take?


NOT MICROMANAGING DOES NOT EQUAL "INATTENTION TO RESULTS"

We looked at Lencioni's Model of the 5 Dysfunctions of a Team when I wrote about the importance of trust.  The peak of the pyramid in this model is inattention to results. 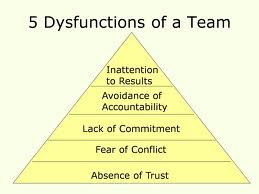 Functional teams will have both manager who are accountable for what has been delegated to them and leaders who pay attention to results.  The point here is that there is no need for the leader to continue to try to do the job of the manager and their own job as well.  Once a job or role is delegated, the leaders responsibility is shifted from actually completing every task to: